The book exhibition “The great French writer – Francois Rable” dedicated to the 525-th birthday of the writer.

On July 5, 2019 there in the reading hall of world literature department is organized the book exhibition “The great French writer – Francois Rable” dedicated to the 525-th birthday of the writer.

Francois Rabelais (1494-1553) is the well-known writer, scientist, philosopher, public figure. He was born in the precincts of Сhinon in Touraine. Rabelais’ s father  is a forensic official and worked as a lawyer. In 1511 Rabelais was given to the Franciscan abbey in Poitou where he studied theology, the Greek and Latin languages. 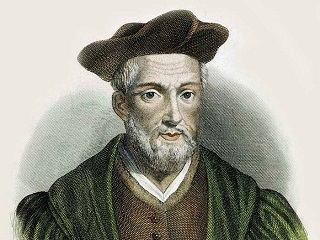 In 1530 he entered the medical faculty of the university in Montpellier where he soon received the degree of bachelor. Rabelais was studying the tractates of Hippocrates and read lectures in medicine. In 1532 he became chief doctor of the Lyon hospital in Pont-deu-Ron.

The main work of Rabelais which brought him world fame is his novel “Gargantua and Pantagruel” in which under the cover of jocular narration about different false events he gave an extremely sharp and deep criticism of the establishments and moods of the moribund middle ages, setting the system of the new humanistic culture against it.

The impetus for the creation of the novel by Rabelais was the publication in Lyon in 1532 of the anonymous “people’s book” named “The great and invaluable chronicles about the great and giant colossus Gargantua”. The success of this book which represented by itself the banal specimen of the late-knight novel gone into the lower classes- the absurd piling up of different adventures with the participation of King Arthur, “the gogs and magogs” etc. drove Rabelais onto the thought to use this form for the presentation of something else, of more serious content, and in 1533 he published as its continuation “The horrible and bad deeds and feats of renowned Pantagruel, the king of dipsods, the son of the great giant Gargant.

F.Rabelais is one of the greatest masters of depiction, sharp dialogue and portraiting. He did a lot for the development of the French language. As a humanist he entered no doubt many antique elements into it. There are in his novel more than 1000 Latinisms and more than 500 Hellenisms, from which a couple of dozens were introduced by himself. The novel of Francois Rabelais is the encyclopaedia of knowledge of those times. Innumerable are

the citations by Rable from different works of the authors, ancient thoughts, and the author uses the material very differently, sometimes with full seriousness to prove some thought, sometimes for the comic effect, sometimes for ornamental purposes, but always mastering it and modernizing it in accordance with his idea and artistic intentions.

The weapon of Rable’s satire is laughter. He ridicules many human vices, the clergy, the ignorance and laziness of the monks. The creative activity of Rable is the very real encyclopaedia of his epoch, but it is notable I that it is the joyful encyclopaedia of life.

F.Rable is the author of the famous phrase “Appetite comes while eating”. In the honour of Francois Rable is named the asteroid Rable opened by G.K.Karachkina at the Crimea Astrophysical laboratory on October 14, 1982.

Of all the great authors of world literature F.Rable belongs to the creators of European literature. The French romantics, especially Chatobrian and Hugo put him among the small number of “greatest geniuses of mankind” of all times and peoples. An especial acknowledgment of the people of our times is the fact that the great F.Rable was for peace for man and mankind.

There at the book exhibition out of the fond of National library of the RK are presented the works of the writer, literature about him and his creative activity in different languages of the world.

We invite to the book exhibition!

We have 324 guests and no members online