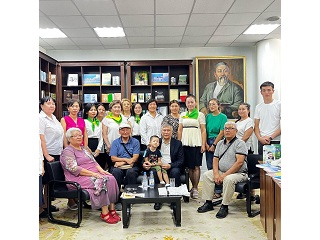 On August 7 there in the reading hall after Oraz Zhandosov of the Service “Kazakstan kitaptary” took place the meeting between the readers and the well-known Kazakh writer, dramaturgist, the akyn-improvisor, zhyrshy, satirist, critic, literary expert, director, scenario-writer, cinema actor, journalist, TV-host Bayangali Alimzhanov.

Bayangali Alimzhanov was born on October 16, 1954 in the city of Stepnyak of the Enbekshilderskiy district of the Kokchetavskaya region of the Kazakh SSR (from 2017 the district after Birzhan sal of the Akmolinskaya region) in the family of the usual labourers. After finishing the secondary school he continued the education at the department of the Kazakh language and literature of the philological faculty of the Kazakh state university after S.M. Kirov in Almaty city.

After the graduation from the university in 1977, Bayangali Alimzhanov started working as a scientific worker at the house-museum of Sabit Mukanov. In different times he worked in the editorial offices of the republic newspapers of “Leninshyl zhas” (as a correspondent), “Kitap zharshysy”, “Kazak adebiyety” (the literary editor); the literary editor of the magazines “Baldyrgan”, “Zhuldyz”; as the editor of the documentary films at the cinema studio “Kazakhfilm”.

Alimzhanov is the author of more than 60 books written in the Kazakh and Russian languages. His works are translated into many languages of the world.

In 2006 there to Bayangali Alimzhanov was given the honorary title of the Honored figure of Kazakhstan.

There within the framework of the meeting out of the fond of National library of the RK was organized the book exhibition about the life and activity of B. Alimzhanov, at which there are presented his books, translations and articles.

The host at the activity was the head of the group of the Service “Kazakstan kitaptary” K.N. Kasymbekova, who carried out the review over the book exhibition. During the conversation the guests asked the writer many questions about his creative activity.

The writer answered with interest different questions. The participants of the meeting expressed their acknowledgment and admiration with the creative activity of B. Alimzhanov.

There in the activity participated the readers and young specialists of the library of the RK.