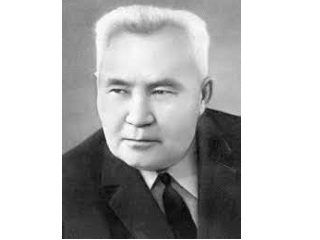 There in the reading hall after Oraz Zhandosov of the Service “Kazakstan kitaptary” is organized the book exhibition “Syrly sezim akyny” dedicated to the 115-th birthday of the prominent figure of Kazakh literature, poet Gali Ormanov.

Gali Ormanov was born on August 15, 1907 in the village of Kyzyl Zhuldyz of the Kapalskiy district of the Almatinskaya region. In 1923-1928 he studied at the Kazakh institute of people’s enlightenment in Almaty city. In 1943 he graduated from the Kazakh pedagogical university. He was the literary secretary of  Zhambyl  Zhabayev.

The book exhibition “Syrly sezim akyny” is represented with the materials:the encyclopaedias, biographical reference editions, fiction literature and the literature about him.

The purpose of the book exhibition is to multilaterally popularize the works of the poet and translator, acquaint the readers with the literary heritage of Gali Ormanov.

The first collection of verses saw the light in 1934 under the name of “Shenber”. There also saw the light the poems “Shaulder” (1934), “The surrendered fortress” (1935), the book “The confession of the woman” (1936), the prosaic collection “The rise”. The works of Gali Ormanov describe the courage of the people, their fight against the elemental powers of nature. There in the works “The people – the Hercules” (1941), “The oak-tree ” (1944) it is narrated about the hardships of the war, the heroism of the soldiers, their love for Motherland, the heroic labour in the rear. The poetry of G. Ormanov is characterized by the brightness and expressiveness of the language, the mastery of artistic depiction. There in the poetical works and in the books of the after-war years was demonstrated the mastery of the poet in the depiction of the modern social events: “The song of life” (1948), “The heart of the child” (1949), “Let our travel be good” (1957), “The wings of the thought” (1961), “The fiery river” (1965), “The wings of the song” (1975), “The songs of the years” (1976).

He translated into the Kazakh language the first book of the Kirghiz epos “Manas”. Gali Ormanov did a lot also for the propagation of the Russian classical and Soviet literature among the Kazakh readers. To him there belong the translations of the poem “The copper horseman” of A.S. Pushkin and “The Tambov treasurer” of M.Yu. Lermontov, the novels “Anna Karenina” of L.N. Tolstoi and “The live water” of A. Kozhevnikov, “The marine soul” of L. Sobolev and “The white birch-tree ”of M.S. Bubenov, the short novels “The Nevskiy avenue” of N.V. Gogol and the cycle of stories of A.P. Chekhov.

The creative merits of Gali Ormanov were awarded with the orders of Lenin, the Labour Red Banner, the Red Star and other medals.