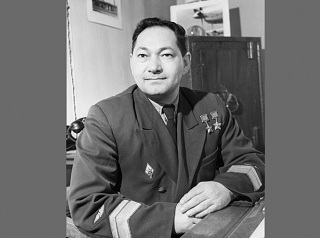 There in the reading hall after Oraz Zhandosov of the Service “Kazakstan kitaptary” is organized the book exhibition “Aue shaikasynyn kakharmany”, dedicated to the centenary of the legendary attack aircraft flyer, twice Hero of the Soviet Union, major-general of aviation of Kazakhstan Begeldinov Talgat Yakupbekovich.

is organized the book exhibition “Aue shaikasynyn kakharmany”, dedicated to the centenary of the legendary attack aircraft flyer, twice Hero of the Soviet Union, major-general of aviation of Kazakhstan Begeldinov Talgat Yakupbekovich. Talgat Begeldinov was born on August 5, 1922 in the village of Maibalyk of the Korgalzhinskiy district of the Akmolinskaya region. From the very childhood the boy dreamed of the sky and he dreamed of becoming a flyer. In 1938 Talgat enters the air-club in the city of Frunze. In 1940 he enters the Balashovskaya military aviation school of pilots (to the west of Saratov), after that he was transferred to the Chkalovskoye aviation school(the city of Orenburg) which he finished in 1942.

There within the 144-th Guard attack aviation regiment he fought at the Kalininskiy, Voronezhskiy, Stepnoy fronts and showed heroism while liberating Ukraine. Altogether there during the years of the war T. Begeldinov made more than 300 military flights, shot down 7 enemy aircraft, demolished tens of tanks and cannons.

After the war in 1950 he finished the Military-air academy and up to 1956 continued service in the Military-Air forces of the USSR. In 1957-1970 he is in the civil aviation. He worked as deputy chairman of the Department of civil aviation of the Kazakh SSR.

He headed the work for the creation of the runways in the cities of Almaty, Aktobe, Karaganda, Kostanai, Zhambyl, Ust-Kamenogorsk and other regional centres. In 1968 T. Begeldinov graduated from the Moscow engineer-construction institute by correspondence, after which

There for the feats committed during the time of the Great Patriotic war he was twice awarded the title of Hero of the Soviet Union, awarded with the order of Lenin, the Red Star,

the Gold Star, two orders of the Red Banner and other medals. In memory of the famous pilot Talgat Begeldinov there were established the busts in Kokshetau and Frunze (now Bishkek city). His name was given to the Military institute of the Forces of air defence in Aktobe city. About him there were shot the films, and the documents and photographs remain forever in the exposition of the main museum of the Great Patriotic war in Moscow.

There at the book exhibition “Aue shaikasynyn kakharmany” are presented the materials about the life and activity of Talgat Begeldinov – the encyclopaedias, reference books and books: “The 305 raids” (1966), “The Ils attack” (1966), “The air fights” (1967).

After that the exhibition reflects the materials which glorify the heroism of the legendary pilot, the books and articles about him on the pages of the periodical press. The purpose of the book exhibition is the acquaintance of the readers with the heroism and contribution of the pilot into the common Victory during the time of the Great Patriotic war, and also the upbringing of the feeling of patriotism, love for Motherland of the growing generation.