Оrganized the exhibition “The cause of the whole life”, dedicated to the 125-th birthday of the academician, professor, doctor of science (medicine), honored figure of the Kazakh SSR Alexander Nikolayevich Syzganov 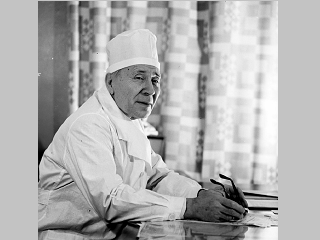 There in the Hall of periodical editions is organized the exhibition “The cause of the whole life”, dedicated to the 125-th birthday of the academician, professor, doctor of science (medicine), honored figure of the Kazakh SSR Alexander Nikolayevich Syzganov.

Alexander Nikolayevich Syzganov was born on August 17, 1896 in the village of Staroye Zhabino of the Arskiy uyezd of the Simbirsk guberniya (now Tatarstan). After finishing the gymnasium in Arsk city A.N. Syzganov in 1915 entered the medical faculty of the Kazanskiy university. From 1922 to 1934 he was assistant at the chair of surgery, became assistant professor of the institute. In June, 1922 he successfully passed all “the established state trials“ and got “the right of doctoral practice on the whole territory of the RSFSR and the union Soviet Republics”. He spoke well the French language and possessed the German language.

In March, 1934 together with his family A. Syzganov came to Alma-Ata. From 1934 to 1963 he was the head of the chair of general surgery at the Alma-Atinskiy medical institute, also in 1945 he founded and simultaneously from 1945 to 1975 was director of the Institute of clinical and experimental surgery in the city of Alma-Ata, he headed the works in iodining of salt with the purpose of forestalling the goiter illnesses, he started the operations of the tubercular, oncological and cardiological patients, and was one of the organizers of the Republican oncological dispensary, opened in 1936.

During the years of the Great Patriotic war he organized the Republican station of blood transfusion, where there was received the Kazakh substitute of blood – “KZK”. He created the scientific school of surgeons-clinicists in Kazakhstan, there was offered the physiological theory of carcero-genesis, there was elaborated the methodology of the operations upon the heart. There by his initiative were organized the Anti-goiter dispensary with the affiliates in the regional centres and industrial cities.

A.Syzganov is the author of more than 150 scientific works, 900 scientific publications, 10 monographs and more than 200 articles. Under his leadership there were defended 18 doctoral and 80 candidate dissertations.

Academician A.N. Syzganov died in 1980. The decades passed but the grateful memory of the Kazakhstanis keeps his great name. There upon the building where in the last years lived the scientist (in Tulebayev street, the corner of Kabanbai-batyr street) was installed the Memorial plaque. One of the streets in Almaty city is named after A.N. Syzganov. There successfully continues its activity the Scientific centre of surgery (earlier the Institute of clinical and experimental surgery), which proudly bears the name of the great scientist and pedagogue.

There upon the exhibition are presented the materials, reference editions about the life and activity of academician A.N. Syzganov, his scientific works published upon the pages of the periodical press from the archival fond of National library of the RK. There for the reader will be of interest the articles of the scientist from the scientific journal of the Kazanskiy medical university (1933), “The medical journal of Kazakhstan” (1935), “Healthcare of Kazakhstan” (1949), “Experimental surgery” (1956), “The herald of the Academy of sciences of the Kazakh SSR” (1976).

There upon the exhibition one can find the unique article of A.N. Syzganov “About the collateral lymph-circulation” published in the journal “Soviet surgery”, issue 3, 1932 which reflects on e of the first scientific works in the world by the given problem.

We have 603 guests and no members online