There in the reading hall of the Service of world literature is organized the permanent book exhibition named “The book nears the cultures”. 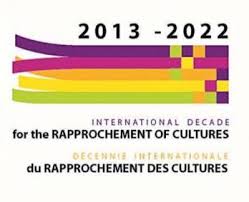 There at the 36-th session of the UNESCO General conference there was made a proposal by Kazakhstan about the announcement of “The international decade of nearing the cultures”, which was supported by the 26 foreign countries. The UNO General Assembly by its resolution dated 10.12.2013 announced the carrying out of “The International Decade for nearing the cultures for the years 2013-2022”, denoting the significance and the prospect of the intercultural and inter-confessional dialogue of the peoples of the world. There into the programme of the Decade entered the cultural activities around the whole world, the basis of which is the interaction of cultures with the purpose of strengthening peace and preservation of general human values.

The role of Kazakhstan is the most important one in this project. Our country is the initiator and the active member of the Executive council, which organizes the important activities in the intercultural and inter-religious dialogue. “The politicians understand that the nearing of the cultures is the long but the only one way for nearing the peoples, the only way for strengthening peace and preservation of life on Earth”, - said in his speech the permanent representatives of the Republic of Kazakhstan in UNESCO Olzhas Suleimenov.

Kazakhstan is a multicultural, multinational, multi-confessional state. We are all united by the general care about our planet, the striving towards the high standards of education, scientific progress and steady development. The spiritual basis of each civilized people is the striving for peace. For the Republic of Kazakhstan, upon the territory of which there peacefully live the representatives of more than 130 ethnoses, is especially near the activity of the UNESCO directed upon the strengthening of the intercultural, inter-civilizational and interreligious dialogue.

There upon the book exhibition “The book nears the cultures” out of the fond of National library of the RK are presented the documents pertaining to the activity of the UNO and UNESCO for the international nearing of the cultures, the research about the modern development of mankind in the preservation of peace on Earth, the culture of the peoples of the world, cooperation of Kazakhstan with the UNO, UNESCO and other international organizations.