Organized the book exhibition, dedicated to the 80-th birthday of the people’s writer of Kazakhstan, literature expert, researcher of the folk heritage of the Kazakhs Mukhtar Mukanovich Magauin. 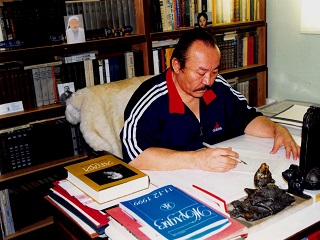 There in the reading hall of “Kazakstan kitaptary” is organized the book exhibition, dedicated to the 80-th birthday of the people’s writer of Kazakhstan, literature expert, researcher of the folk heritage of the Kazakhs Mukhtar Mukanovich Magauin.

The first story of the writer “Keshkurym” was published in 1964 in “Zhuldyz” magazine.

M.Magauin is the author of the multiple collections, novels, short novels and stories: “Aksha kar” (1969), “Bir atanyn balalary” (1973), “Kiyandagy kystau” (1977), “Kok kepter” (1979), “Kok munar” (1971), “Shakan sheri” (1984). In the novel-dilogy “Alasapyran” (in two volumes) (1981-1983) the author truthfully describes the historical interrelation of Kazakhstan with Russia and the social-political relations during the reign of the Kazakh khanate of Tauke-khan (at the end of the XVI-th – beginning of the XVII-th centuries). There in the historical and artistic works the writer reproduces the unique colorful reality of this or that historical period, the life of the people, their rites and customs, their dreams and aspirations.

M.Magauin is the author of the textbooks “Kazak khandygy dauirindegy adebiyet” (1992), the Reader (1993) and others. His works are translated into many languages of the world.

To his pen there belong the translations into the Kazakh language of the collection of chosen stories of S.Moem, the novel of G.Haggert “The mines of the king Solomon” and others. The distinctive trait of the talent of Mukhtar Magauin is the striving not only to deeply understand the history of his people but also truthfully reflect it in the literary works.

For his labour activity M.Magauin is marked by the State prize of the Kazakh SSR (1984). He is the winner of the international prize of Turkey “The best writer of the Turkic world” (1997), “Tarlan” (2002). At the present time M.Magauin lives in the city of Prague (Czechia).

There at the book exhibition out of the fond of National library of the RK are presented the materials about the life and creative activity of the writer, his works and articles on the pages of the periodical press.