Took place the solemn ceremony of donation of books from the Government of Saint-Petersburg to the National library of the Republic of Kazakhstan. 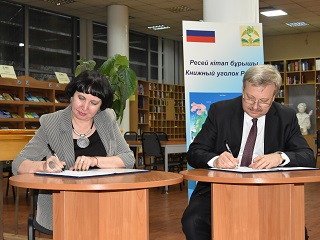 On November 4, 2019 at 16:00 hours there took place the solemn ceremony of donation of books from the Government of Saint-Petersburg to the National library of the Republic of Kazakhstan.

There within the framework of the cultural-business mission to Almaty city the library was visited by a delegation from Saint-Petersburg. There at the meeting were present and spoke Deputy Chairman of the Committee for external relations of the Government of Saint-Petersburg A.D.Khlutkov, Deputy head of the representation of Rossotrudnichestvo in the RK, Consul of the General consulate of the RF in Almaty city I.V.Pereverzeva, Deputy head of the Department of culture of Almaty city R.N.Bektursynova.

There with the word of greeting spoke Director of National library of the RK B.K.Ospanova.

There was presented as a gift the literature about Saint-Petersburg, and among them- “The golden collection of nest places of Saint-Petersburg” from a series of gift editions.

There into the edition were included approximately 1000 professional photographs.

the book of Igor Bogdanov “The Leningrad blockade from A to Z”. the book is based upon all the accessible sources – “The guide around Leningrad” of 1940, the official two volumes named “Leningrad in the Great Patriotic war of the Soviet Union” (1944), to the fairies and letters of the defenders and residents of the city.

There at the solemn ceremony was signed the Act of transfer of books. Also there for the delegation was carried out an excursion around National library, there was shown the slide-show about the activity of the Book corner of Russia.

We have 196 guests and no members online