Тook place the meeting with the well-known Kazakh writer, winner of the State prize of Kazakhstan Beksultan Nurzhekeyev. 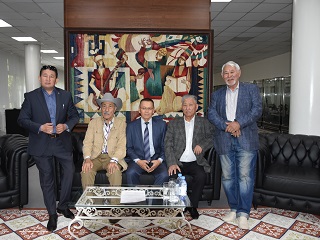 On September 18, 2019 at 11:00 hours there in the Hall after N.Dauletova within the framework of implementation of the programme article of Elbasy N.Nazarbayev “The seven facets of the Great steppe” took place the meeting with the well-known Kazakh writer, winner of the State prize of Kazakhstan Beksultan Nurzhekeyev.

The first short novel of B.Nurzhekeyev was published in 1968 on the pages of the magazine “Zhuldyz”. The main theme of the works of the writer is the theme of love, family, the fates of women, the family imterrelations.

The activity was opened by the scientific secretary of National library of the RK B.Zh.Zhunisbekov. The moderator of the evening was the well-known Kazakh poet, member of the Writers’ Union of Kazakhstan Muratkhan Shokan. The guests of the evening were: the well-known Kazakh writers Kuanyshbai Kurmangaliyev and Kadyrbek Segizbai, the teacher at the faculty of “Philology and world languages” of the Kazakh national university after Al-Farabi, doctor of science (philology), professor Guldarkhan Smagulova.

There at the meeting the writer B.Nurzhekeyev tried to disclose his creative activity, the social role of woman in modern society, and he also narrated about the heroes of his works. All the works of the writer raise the theme of the history of the Kazakh people and the relations between men and women. Each work differs from another by originality and uniqueness. The participants of the evening asked questions of the writer and underlined the importance of such activities and expressed their huge gratitude to the collective of the library.

There within the framework of the evening was organized the book exhibition “Ult zhane aiyel” from the fond of National library of the RK, which reflects the materials about the life and creative activity of B.Nurzhekeyev, the family photographs, the works and publications of the writer on the pages of the periodical press and also the demonstration of the documentary film about the writer and his family. The review of the exhibition was carried out by the head of the group from the Service “Kazakstan kitaptary” G.N.Kasymbekova. There were performed the musical numbers by the honored figure of culture of the RK A.Adilbekov – an excerpt from the historical zhyrau “Kyultegin batyr”, of Byurlen Kanat “Ana turaly an” and of T.Urmanbekov “Sary bidai”.

The activity was organized by the services “Kazakstan kitaptary” and “World literature”. The guests of the evening were the readers, librarians, students of colleges and universities and the pupils of Almaty city, of the Kaskelen college of culture and also the representatives of mass-media.

We have 332 guests and no members online